DIFF LOCK AND AXLE LOCK
Recently a customer who bought a pre-1989 4WD Suzuki Carry to import to Australia asked us:
“What’s all this about Diff Lock” and “Axle Lock” on the Carry?” What do they do? 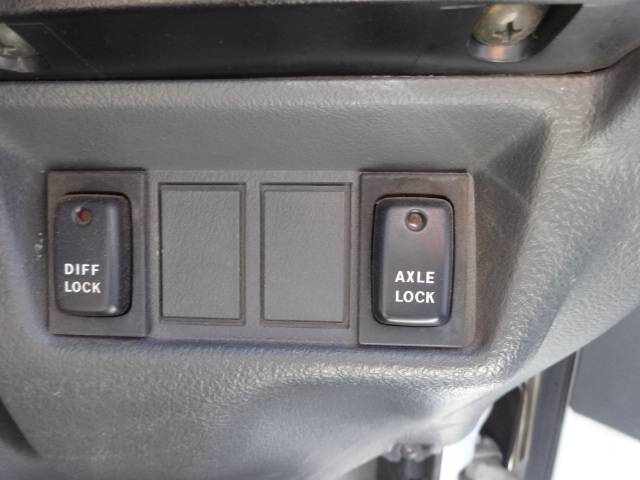 Since he’s not the only customer looking for a Japanese minitruck to ask us that question, we’ve decided to put the answer up here in this section of our website. (And we’ll put up other technical info as the questions come in from our customers and as time permits.)

So here’s the answer:

The diff lock acts on the rear differential and makes both left and right rear wheels turn together even if one wheel is not in contact with the ground and cannot find traction.

The axle lock button locks the front drive system to the transfer. It’s similar to a free-wheeling hub system that you lock and unlock using the axle lock button in the cab, rather than having to get out of the vehicle to turn the front hub locks manually (as you had to do on the old JA11 Jimnys).

If you put the truck in 4WD High but do not select axle lock to lock the front drive system to the transfer, you will still have only 2WD.

But in a minitruck with 4WD High and 4WD Low and an “axle lock” button, if you select 4WD Low, the front drive system is engaged automatically and you are in 4WD. You do not have to push the axle lock button to have 4WD in low range. If you select 4WD High, however, the front drive system is not engaged unless you have pushed the Axle Lock button.

IS A TURBO WORTH IT ON A MINITRUCK?
Recently a customer from Canada asked us if the turbo option on a minitruck is worth having. Does is give much of a useful power increase? Does it suck gas? Is it reliable?

We would say that, for minitrucks that will be primarily off road or on the farm, the N/A units are more than fine due to their low gearing. Town to town and for a dash on the highway, the turbo is good to have. Here is what we wrote to our customer:

On the turbo side: Yes, the upgrade is well worth it and you get quite a power boost. You’ll manage loaded hill climbs better and town to town and highway runs will not be times when you feel that you’ve got a small engine.

These Suzuki turbos are not too heavily boosted, so the engine still remains a service engine and not a performance oriented unit. (Although we would say that, in terms of strength and very long term reliability, the earlier, iron-block, F6A 660cc engine is better than the later K6A 660cc. But the K6A has the advantage that it uses a timing chain and not a timing belt, so replacement is kind of not necessary. The K6A in the Kei trucks in also higher output in stock form. It’s six of one and a half dozen of the other.)

Gas mileage is not much affected with a turbo; a bit, yes, but surprisingly little (measured in tenths of a km per liter, not whole kms per liter worse mileage).

Down sides are that you must give the engine time to warm up before driving off or asking it to do hard work. Same with cool down: after a hard run or hard pull, do not just shut it down, let it cool for a minute or two.

Change the oil after 5,000 to 6,000 kms and change the filter every second oil change. Do not run old oil in it. And used a decent quality of oil. Don’t worry that you have to use an expensive synthetic oil. Nope. Just a decent mineral oil, changed frequently, is all that is required.

If you do all these things, the turbo engine will give long life.
So there’s the lowdown on my experience with turbos. Yep, they are worth it. Just warm/cool/oil and you’re set.

DAIHATSU HIJET JUMBO OPTION. ANY GOOD?
Another good query from a Canadian who just bought a minitruck from us here in Japan: “What about the Jumbo cab option on the Daihatsu HiJet? I hear that hunters go for it.”

This is what we told him:

The Jumbo idea for the HiJet came out way back in 1983. Left to right is no bigger in a Jumbo. But the driver’s seat has 4cm more forward/backward slide that the passenger’s seat or the driver’s seat in a regular HiJet.

And, unlike in a regular HiJet, both seats recline backward a bit.

We think that the reason the hunters go for it (which they certainly do up in the mountains here in Japan where you will see a number of the Jumbos when the deer hunters get together) is that behind the seats you’ve got space for a rifle, coils of rope, radio tracker set for the dogs, and other items that you need to keep dry and cannot store in the load bed. In the non-jumbos, interior dry storage space for equipment is at a premium.

The load bed, front to rear, is smaller, though.

Here is a link from Daihatsu’s site that show you some pictures of the interior of a Jumbo, as well as other pics. http://www.daihatsu.co.jp/lineup/truck/detail.htm

Cheers, Japan Car Direct>With the addition of Electronic Fuel Injection to the Daihatsu 660cc motor you’ll get a boost up in power of about 5% over the carbureted unit. Gas mileage goes up a touch, too, but we don’t have any figures.

Both carb and EFI are reliable systems. Carb is easier to fix and tends to give early warning signs when it is starting to have trouble (rough idling, hesitation, etc.). Electronic fuel injection systems can suddenly cut out without warning or can suddenly rev up if a sensor goes wonky but such problems are amazingly rare on a Japanese-built EFI system built anytime after the early to mid 1980s. They are very reliable, but when the time for servicing comes, if it ever comes, you’ll need to ask a proper garage to help you. Home service of a carburetor is more possible as it is a less technology intensive system by its very nature. (Not less complex, though.)

Either of these two systems, carb or EFI, are fine.

The Twin Cam arrangement does not add any more power, interestingly enough, but I suspect it gives better top end power at the expense of a slight loss in low end torque. The Twin Cam engines have 4-valves per cylinder whereas the Single Over Head Cam engines have 2-valves per cylinder. Again, I don’t have solid figures, just going on basic principles of piston engines, 2-valve vs 4-valve systems.

The Distributor Less Ignition (DLI), is a fully electronic ignition system. Similar to EFI in its use of higher technology, it will be less easy to service yourself with just a screwdriver and wrench, but it is also more reliable, gives better gas mileage, and has a longer service life.

Really, it’s a matter of choice as to do you want simple, old school stuff, carbs and distributors and a minimum number of cam shafts, or do you want the more high tech stuff. Of course, the simple type of engines are not being made by many (or any) makers today, so at some point in the far future parts will not be available. Of course the same could happen to high tech systems that get superseded by other, newer high tech systems. But whichever way you go, these minitrucks are all solid characters and will last well and do their job for you fully and we won’t be facing parts issues for years and years yet.