Suzuki Carry
The Suzuki Carry is by far the most popular mini truck in Japan and you can easily find secondhand models in pristine condition. It also has the best parts support in the United States, partly because so many of its components are shared with later-model Carrys and other Suzuki vehicles like the Jimny. Lightweight and durable, the Carry is great for off-road work. 4WD is available at all speeds, letting you haul loads and travel fast over rough terrain. The highly reliable engine is centrally mounted beneath the front seats with a transmission geared low for hauling. 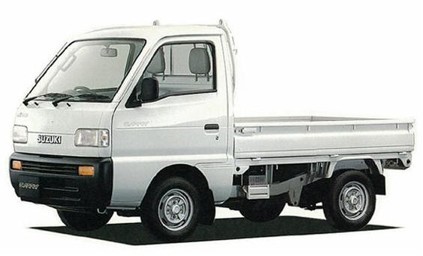 Subaru Sambar
The Sambar engine is mounted just behind the rear axle, making the ride quieter and less tiring than in models with engines mounted under the seats. This explains why a major delivery company in Japan exclusively uses Sambars. The rear-heavy design is slightly noticed when cornering fast on wet or snowy roads, but the four-wheel independent suspension helps keep everything under control. The rear engine also contributes to solid off-road traction. When the going gets rough and you enter first gear, 550cc models conveniently enter 4WD mode without the need to press a button. They switch back to 2WD when you enter second gear. 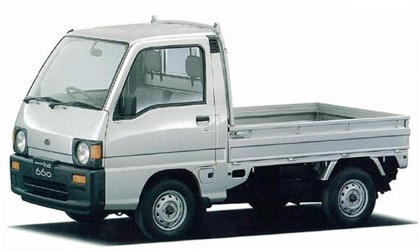 Honda Acty
The Honda Acty is quiet and comfortable to drive. It supplies more power than other mini trucks when traveling uphill at high speed thanks to basically the same reliable engine powering the Honda Beat sports car and Honda Today. As in the Sambar, a rear-mounted engine (just in front of the rear axle) contributes to a quieter ride, less cabin heat in the summer, higher stability when carrying heavy loads and very slight oversteer when cornering fast on roads covered with gravel, rain or snow. Parts from 660cc models are often compatible with 550cc models. 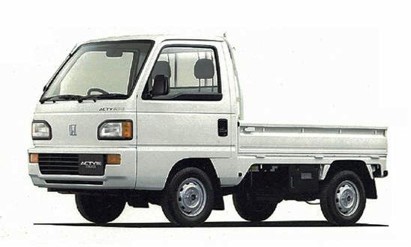 Daihatsu Hijet
The Daihatsu Hijet is comfortable, durable and perfect for hauling loads. In comparison with the Suzuki Carry, it offers slightly more legroom in early to mid-1990s models and a higher sense of luxury overall. But the Hijet also tends to cost a little more. Its three-cylinder water-cooled engine is mounted beneath the front seats and delivers excellent acceleration. Hijet parts are easier to find in the United States than parts for any mini truck except the Suzuki Carry. Dump truck models are available. 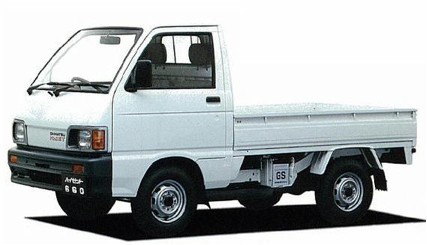 Mitsubishi Mini Cab
The Mitsubishi Minicab came came into its own from the mid 80’s. Angular headlights became the defining feature of the Minicab’s styling, along with larger windows to improve visibility. A rear wiper, electronic locking rear gate and power brakes were adopted. Mitsubishi began to offer a wide variety of both FW and 4WD model variations. The next generation Minicab incorporated many class-leading features such as an automatic free wheel hubs adopted on all four-wheel drive models. The estate models featured the first sliding sunroof in their class. Mitsubishi also became the first manufacturer to offer a supercharged kei truck. 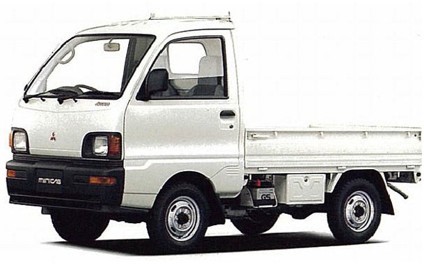 And What About Mini Truck Options?

Not only are there quite a number of mini truck models that you can import yourself directly from Japan, there are also many options for mini trucks. When we are talking about Japanese mini trucks and we say “options,” we don’t exactly mean the sort of options that you can get on a fancy road car, like a luxury sedan or a high end supercar; we’re not talking leather seats with massage and heat features, we’re not talking cruise control and lane assist, we’re not even talking power steering (although that is actually an option on mini trucks, they are not that rough of machines) and we’re not talking cup holders.

When you’re talking mini truck options you are looking at things like a scissors lift (like this one here) and options like the very popular dump bed, perfect for contractors, landscapers, and anybody who often needs to deliver a load of soil or gravel to a tight spot on a project site. You’re looking at four wheel drive, and diff locks and axle locks, which we talk about here on our Japan Car Direct blog. We also have a look at extended (jumbo) cabs and the 4-speed vs 5-speed vs automatic transmission question and the mini truck garden option in this post here.

Now you’re thinking: “A garden option for a Japanese mini truck?” These JCD guys are pulling my leg. No we’re not, we’re serious. Check it out in the link above, at the very end of the post, and click the link there, too. You’ll love it.

These are the kinds of things that we mean when we are talking about mini truck options and what is available at the used car auctions and the used car dealers here in Japan for direct import to the USA, Canada, the UK, Australia, and other countries (regulations permitting, see elsewhere on our site here).

Alright, alright, I guess we’ve got to say something about cup holders. Actually, cup holders are kind of an issue in the mini truck fraternity and some of the best minds have been working on it, as you’ll see here, here, and here, over at Mini Truck Talk. One of the best sites, by the way, for people who own or who want to buy a Japanese mini truck.