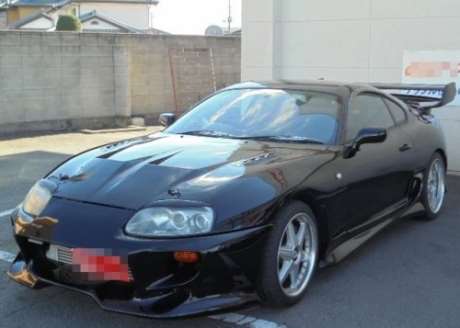 This particular vehicle is well modded, borderline extreme, with aero kit and multi meters. But even without modding, the legendary JDM Toyota Supra Turbo RZ is one impressive machine — like many other used vehicles available in Japan that are just waiting for enthusiasts to import them abroad.

When released in 1993 as a high-performance, fourth-generation Supra for the Japanese market, the Supra Turbo RZ (JZA80) rivaled many of the most powerful cars of its day. Its big twin-turbocharged 3-liter inline-six 2JZ-GTE engine generates 272 hp and 318 lb⋅ft of torque, while its 6-speed manual Getrag/Toyota transmission gives skilled drivers the means to transmit all that power to the road.

The Supra Turbo RZ is fast from the get go, accelerating from 0-to-60 mph in less than 5.0 seconds. Since the twin turbochargers work sequentially rather than in parallel, they boost torque both early and late in the rpm range, providing lots of practical power whenever you need it.

Handling is also outstanding, as illustrated by impressive skidpad ratings and remarkably effective braking at high speeds, courtesy of an advanced F1-inspired braking system with ABS and yaw control. The Supra Turbo RZ’s liberal use of aluminum throughout the body also makes it lighter than the previous generation for better all-around performance.

Die-hard enthusiasts have kept the legend alive since Toyota discontinued the Supra in 2002. Finally, Toyota resurrected the Supra in 2019 and sold every allotted vehicle in some markets within a few months of its release.

If you weren’t lucky enough to obtain one of these brand new Supras, you can always find the next best thing in the Japanese used car market with a little help from Japan Car Direct. Here, for example, is a beautiful orange 1995 Toyoto Supra we shipped overseas. It was fun to drive not only because of its powerful performance and excellent handling, but also because it looks so stunning and features an extremely sporty cockpit reminiscent of a fighter jet or Formula One machine.

When you’re ready for something super like the Toyota Supra from Japan’s used car market, contact Japan Car Direct.

Back to Vehicles Available in Japan