Some years ago the company I was working for, an insurance outfit, arranged a track day for the motor engineers, vehicle inspectors, and underwriters. That’s where I met my first Integra R-Type.

There was a big track where we could play with the (de-tuned, thank God!) formula cars, a middle-size track for the road going sports cars, your Lotuses, Caterhams, Audi TTs, Honda S2000s, and such like; and there was a smaller, tighter, kill-you-on-the-corners track that was exclusively for the Integra R-Types. They kept the R-Types on this track, 1) to show off their fantastic cornering and, 2) to avoid putting all those more expensive sports cars to shame. The Integra could out handle them. He’d show them all a clean pair of heels in the twisties. 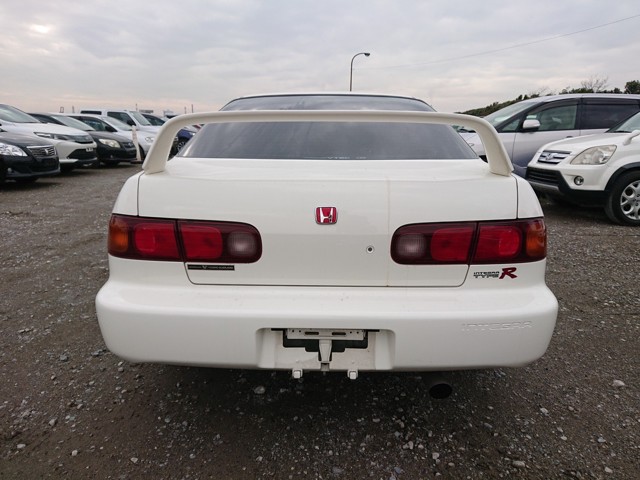 We were in the two door sports coupe Integra R-Types, the DC2 chassis cars, and I can say flat out that I found the handling, the cornering, simply unbelievable. Just amazingly good. At first, when I was not yet familiar with the R-Type, going into the corners I kept putting on the brakes. I kept thinking: “I’m too fast, I’m too fast! Cars can’t take corners this quick!” But the track instructor kept saying: “Go, go, go! Power, power, power!” At first I thought that he must have been overdosing on cheap drugs, but, after a few tries at increasing speed, the car was telling me that the instructor was right. So I let rip. We took those corners, guys, we took those corners. I’d approach each corner at what I thought was too high speed, arrive at corner initial, throttle back enough to shift a bit of weight to the front if I was still scared, the Integra bites down into the road at corner apex, hold it tight and firm on the steering wheel, perfect balance held, then corner exit and on the power again. It was a heart pounding, top of the voice yelling time; one of the best and most thrilling driving experiences I’ve ever had. Does a mid ‘90s Integra R-Type handle well? Oh, yeah! It sure does.

No wonder a number of professional reviewers (Auto Channel, Evo, and others) declared that it was the best handling FF car ever. It sure is.

And now (time of writing: Summer of 2021) these mid 1990s R-Types are available for easy import to the USA and Australia under their 25-year-old used car import regulations. Grab these machines, now, guys. Seriously.

(For the folks looking to import to the USA or Oz, you’ll find the American regs here and the Australian regs here.)

And what we are looking at here now is the four door version of the Integra R-Type. We recently shipped this very clean, very low mileage (37,350 miles!) car to the USA via the port of Baltimore. The car was bought at one of the Japanese used car auctions that we at Japan Car Direct are members of. As you look at the photos above you’ll note right away how clean and obviously well cared for the vehicle is, and to get the car at this low mileage was a real score for us. But that is what the auctions here in Japan are all about: Scoring good used cars. Winning. Our company President coined the term “Winnermen” to refer to JCD’s customers, and it kind of encapsulates what we do: We help our customers win by scoring a good, clean used car for direct import from Japan. (Scott talks about the Winnermen in our interview on the Japan Car Direct blog here.)

Yeah, just look at the pics above: Clean, good condition car. And a really nice, really beautiful body. Sporty, serious looking, but not loud. Lines and proportions are balanced. 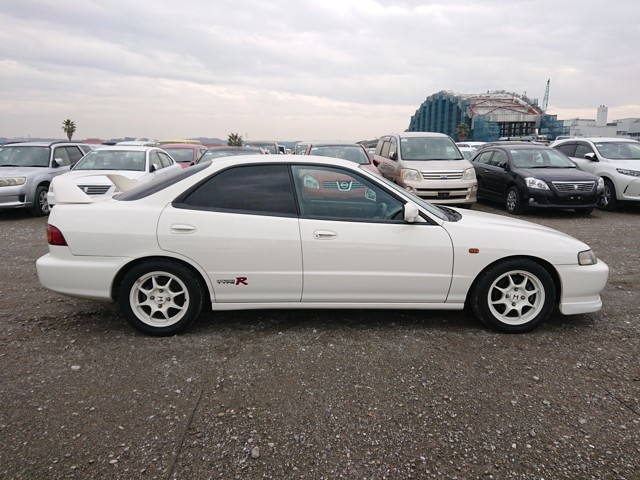 It’s not a big hog, but it’s got four doors and seats for five. It’s a proper sports sedan; practical and roomy and with a nice big trunk. And yet, hold on to your hats, Ladies and Gentlemen, this sedan is, indeed, a pure Integra R-Type. There are only very few, and minor, differences between the coupe version, the DC2 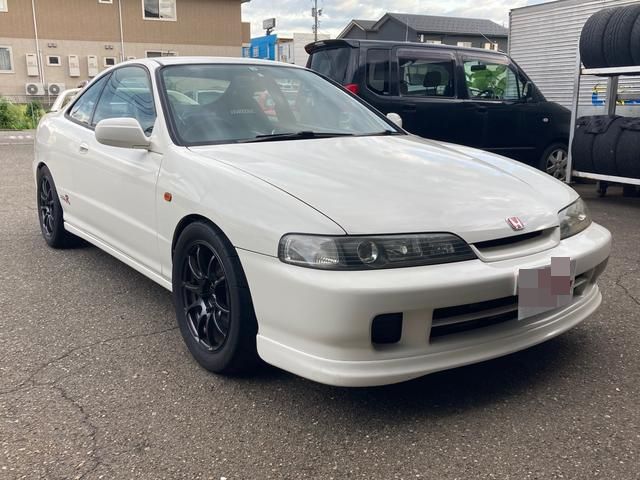 and the sedan version, our DB8 here. 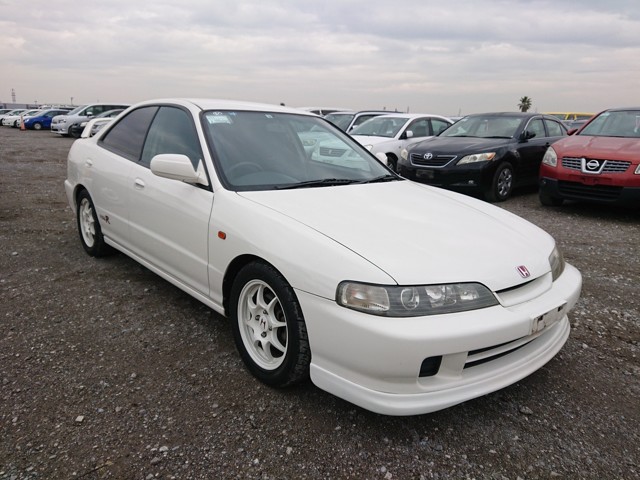 Let’s look at the differences, taking mid ‘90s cars as our examples.

You will find differences in total body length, with the DB8 being 4,535mm long vs the 4,380mm of the shorter DC2. The sedan, at 1,355mm, is also 3.5cm higher than the coupe; and the wheelbase is longer: 2,620mm for the sedan as against 2,570mm for the coupe. Of course the passenger compartment of the R-Type sedan is roomier front to back and top to bottom but it is, surprisingly, just a little smidgen narrower left to right. Another surprising thing is that the total weight of the sedan is only 40kg more than that of the coupe: an even 1,100kg for the DB8 and 1,060kg for the DC2. This is the result of the many, and very ingenious, weight saving design features of the Integra R-Type.

It Was All for The Glory

Those “smart strengthening” weight saving features did not come at the expense of reduced chassis rigidity. Oh, no, no! The chassis rigidity of an R-Type Honda Integra is actually better than that of the standard versions. And that high output, essentially hand-built, 1.8 liter racing motor does not compromise on engine life to provide its high specific power output of well over 100hp per liter. It’s just built really well. (Side note: I’ve been told that Honda never had a repair claim for one of these engines within the warrantee period. I checked that and it seems to be true. I’ve also been told by one of our UK dealer importers that about the first thing to go wrong on a high mileage B18C is the valve stem guide seals. So, if you have a higher mileage Integra R-Type, keep your eye on the dipstick and on any excessive blue smoke at startup in the morning after the car has been sitting; with an old B18C that’s stating to use oil, it’s likely not the rings that are needing attention, just the valve stem seals.)

So Honda put a lot into the Integra R-Type. Lots of design work and the best materials and assembly work. Interestingly, they did not make a profit on these cars. No surprise when you look at the modest initial sticker price. But Honda was in it for something other than the Gold. They were in it for the Glory. The glory of showing what FF can be made to do in a sports car. I think that it’s fair to say, especially for guys of my vintage and older, that we never thought much of Front-engine Front-wheel-drive (FF) when we were thinking (and talking) sporting machinery. For me and my “cohort” it was Front-engine Rear-wheel-drive (FR) all the way. Mid-engine (MR) if you were into exotics, and Rear-engine Rear-wheel-drive (RR) is you were into Porsches. Nothing else counted.

That Honda Integra R-Type I drove on the track back in the UK that day opened my eyes to the real potential of what FF can do with serious sporting machinery, especially on the corners. Since then, my own FF sports cars, driven in rain (and in snow sometimes, too) have shown me another really important feature of FF sporting machinery like the Integra R-Type: Safety at the cornering limit. “My” track R-Type gave me complete and realistic confidence during repeated hard cornering that was so tight we left serious feather wear on the tires after our track runs.

The R-Type was always poised, balance, and safe. When next I’m in the market here in Japan for a used sports car, I’ll be looking to snap up the best condition, low mileage second hand Integra R-Type that I can get. It’s a “winnercar.” 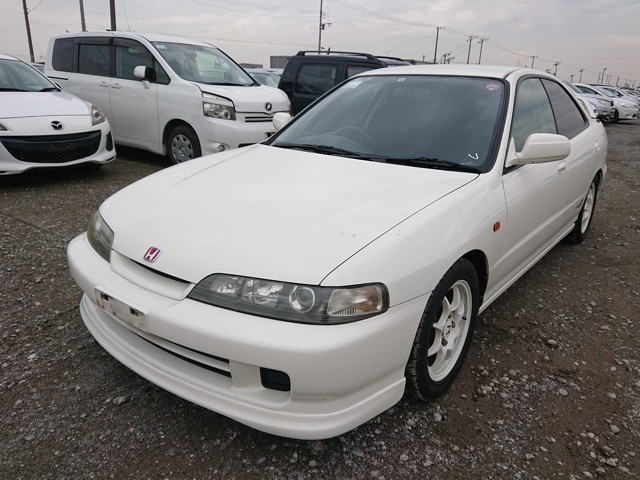 Just have a look at a couple of Japanese race videos here. I’m recommending them because they show a bit of what it is that the Integra R-Type is giving the sports car driver. Both videos are by the Best Motoring International guys who usually operate out of Tsukuba Circuit. The first one (click here), at about the 2:30 point, is a collection of straight drags with the various contemporary competitor cars of the R. Look how well the normally aspirated, front wheel drive Integra does: he sends the two liter FTO packing and does the same with the turbo (!) Silvia. It is only the turbo MR2 with its mid-engine layout and significantly more power that finally beats the R. In the second race (here) you’ll see the R-Type go against a clutch of sports cars in the under 280hp class. The R wins with handling, road holding and braking. He beats them all. Watch this video closely. When I project the Integra’s track performance here into the real driving world that I know, I can really see how excellent handling with good, but not necessarily explosive power (like I’ve had in my turbo cars), will win the day “in real.”

A mid ‘90s Integra R-type from Japan is a jewel, a treasure of a practical, real world sports car, and the four door sedan version like the one we’ve scored here, has got to be, truly, the best FF Sports Sedan Ever.

Get the vehicles you want today at a price you can afford!!

Allows bidding on one vehicle up to 1 million yen.