The Long Running, Long Lasting Toyota Corolla Station Wagon (Van) Has Been a Winning Formula for a Long, Long Time

The Corolla station wagon has been around for dogs’ ages. And for good reason. My gosh, even my mother had one! But that’s not the reason they’re good, I mean, just because my mother had one is not why Corolla wagons are good cars. She had a Chrysler sedan, too, and it was crap. No, the Corolla station wagon, and especially the simple Corolla DX Van that we are looking at here, 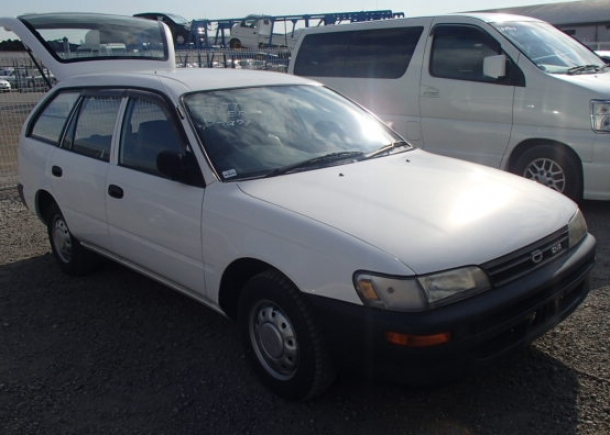 is a good car (a great car, in fact) because it’s a cheap load hauler, it’s ultra reliable, it’s got good parts availability and parts cross over with many other Toyota offerings, it gets good gas mileage, and it just lasts forever. If you’re an independent tradesman or if you’re running your own small business and you need a secondhand station wagon, buying a used Corolla DX from Japan and importing it yourself is a very smart move.

When you’re running your own business, you need reliable transport. You need to carry loads. You need to do it cheaply. A lot of guys automatically jump for the “van” class of vehicle, machines like the Toyota Hiace or the Nissan Vanette. 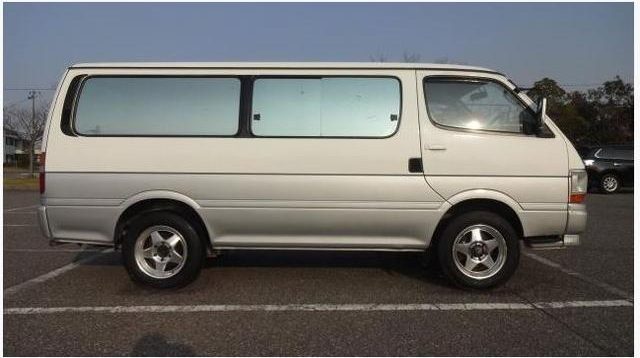 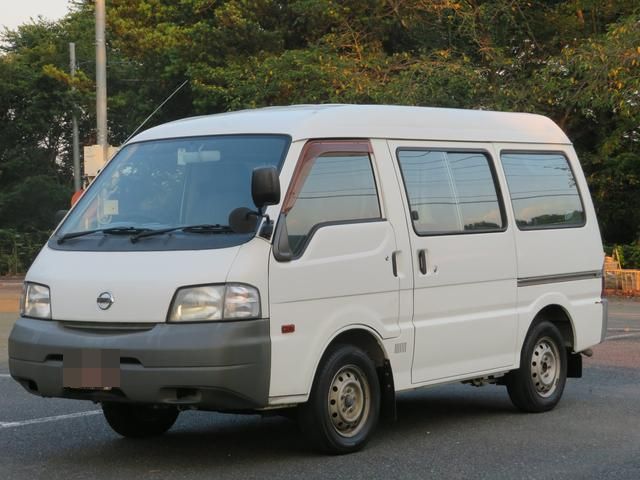 Now, very often, because of the shape and size of the things you need to carry, a big, tall van may be the only option. And if you want a smaller van type vehicle there are the wonderful Kei vans from Japan; have a look here.

But such vehicles do have downsides: They are high, and therefore a bit tippy. (Tell me about it! I once had to dodge an idiot driver who crossed the yellow line and I nearly flipped my Dad’s old VW Bus getting out of that guy’s way. It was a heart pounding moment.) And high vans are subject to cross winds, especially at highway speeds. (Tell me about it! Crossing the Fuji River bridge on the Tomei Expressway here in Japan on a super windy day one time, I thought we were going to be blown off the road and into the river, and a big truck was coming up from behind so I couldn’t just slow right down. Another heart pounding moment.) But a station wagon, an “estate car,” as we call them in the UK, is not a high vehicle, but it still has a big load space and serious carrying capacity. It can do most of what a van can do but it’s not tippy or sensitive to cross winds. A station wagon is just more stable at high speed than a panel van can ever be and, if you ever have to pull some hard and fancy cornering to avoid something, or someone, in the road, your wagon handles much more like a sedan and is thus relatively balanced and stable at the limit as you avoid the problem.

Another plus for station wagons is access to the engine for maintenance. Just open the bonnet (pop the hood) and get to work on the motor. In a van, well, it depends on engine placement. You may need to raise, or even dismount one, or both, of the front seats; you may need to remove floor panels, whatever, to get at the engine and, even then, the working area may be tight.

So, a lot of pluses for the station wagon.

But on the other hand, if you need “the big van,” then go for something like this Nissan Homy here that we recently exported to the USA, and you’ll be happy.

Another very economical option for people who don’t want a full size vehicle or even a Kei van is what I call the “high hatchback;” machines like the small but capable Mitsubishi Toppo BJ, here.

A Bit of Nomenclature

So if it’s a station wagon (or estate car or shooting brake) why is it called the Corolla DX “Van” in Japan? I mean, “vans” are boxy, flat-nosed load haulers like the Hiace and Vanette that we mentioned above, right? Right, yes. But, in Japan, we sometimes use “van” to refer to station wagons which are the simple, essentially “stripped for work,” most basic model; they are intended for load hauling and not for passenger comfort and convenience, although they do have back seats.

The load bay itself is usually not carpeted but rather has a hard-wearing rubber mat on the floor to protect it from scrapes and scratches: 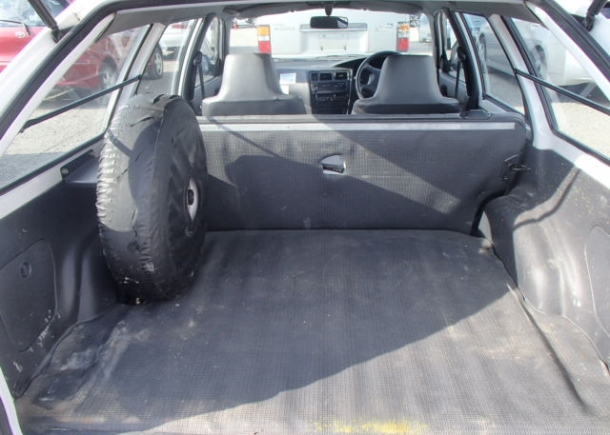 The car that we are looking at here, that we exported from Japan to Myanmar, is the E100 chassis type Corolla Van. Now, back in Canada, my Mom had the E100 chassis type Toyota Corolla Station Wagon, which had a nice carpeted interior, and seat belts for five passengers. It was an early ‘90s car and it’s another of the reasons that I am always praising Japanese cars from the 1990s. That car just kept going and never asked for much maintenance or care. 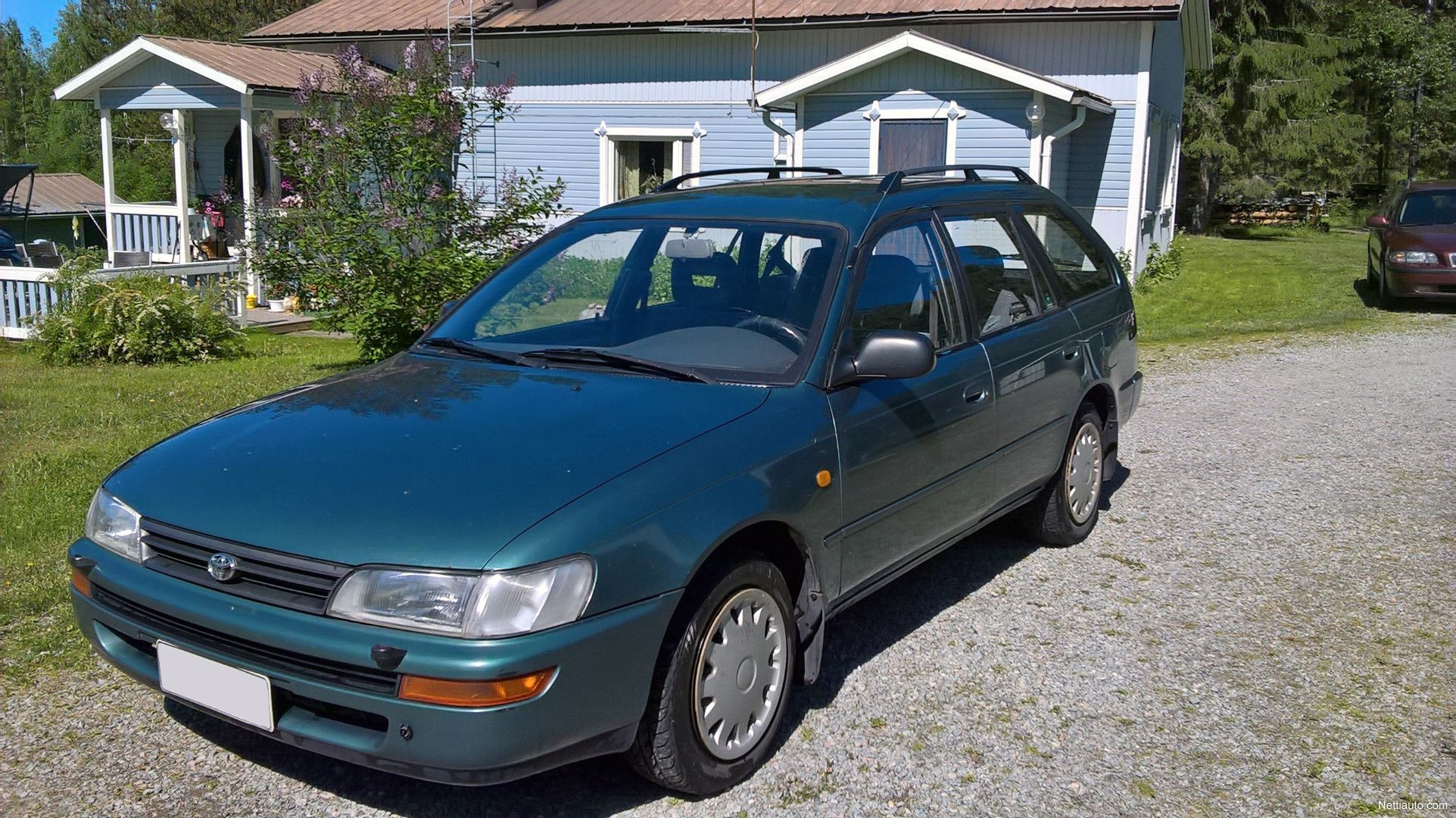 She bought it used and kept that Corolla Wagon for years and years. I moved apartments once using that car and my little sister moved house twice using only that car. And when my Mom finally decided to get a new car, she gave the wagon to the little sister who then kept it for more years.

The only breakdown we ever had was due to my mother’s flagrant lack of maintenance. At around 280,000kms on the clock, I took the Corolla on a long trip around Ontario as a sort of pre-honeymoon with my fiancée. We went up from Toronto to north of North Bay and started across on the northern branch of the Trans Canada Highway. At Smooth Rock Falls we stopped at a small shop. After we came out of the shop I tried to start the engine and it just wouldn’t catch. It just spun on the starter motor. Yep: Broken cam belt. Recommended service interval: 100,000kms.

In talking to my Mom later I asked her: “When did you last change the cam belt?”

She replied with a question, as my mother often does: “What’s a cam belt?”

So that Toyota had been running on the original belt for over 280,000kms. In the end my sister kept the car until it had gone over 400,000kms. Are cars like our Corolla Van DX here reliable and long lived? Oh, yeah! And it’s not just me saying it. If you are thinking of buying a used Corolla Wagon of this type, the E100 chassis type, just talk to any of the people you know who has ever had one and I’m sure they’ll back up what I’m telling you: Super reliable, long lived, cheap to run and good on gas. Is the Corolla Van DX any good? You betcha! They have strong appeal for independent tradesmen and small businesses in all of Japan Car Direct’s major export markets, and especially in the USA, Canada, the UK, Australia, and New Zealand. (Just click on the country name to learn about the used car import rules for each of these countries.)

And one more point I would make about these cars: Parts availability is very good because many units were made over many years. There are lots of parts and the car is easy to service. So it really is the tradesman’s friend. And, believe it or not, they are also the tuner’s friend, too. You see, as the “Toyota Corolla Touring Wagon,” these cars continued in production until the year 2000. And there was even a performance version: the “BZ.” These cars came with the justly famous 4A-GE 5-valve engine, perhaps Toyota’s best racing engine: 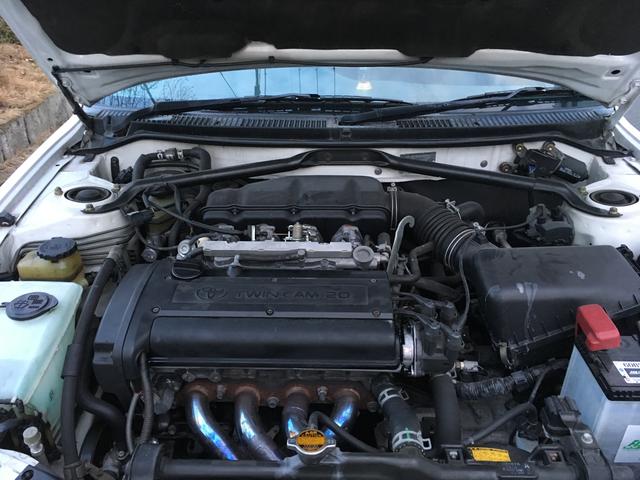 That’s what you get in the Corolla Levin and Sprinter Trueno sports cars. Hot machines! So if you want to upgrade your Corolla Van DX with the engine, transmission, and suspension from a Levin or Trueno, you can actually do it. And if you just want to keep your workmate going, the more basic engines that come stock, the 1,300cc 4E-FE and the 1,500cc 5E-FE, 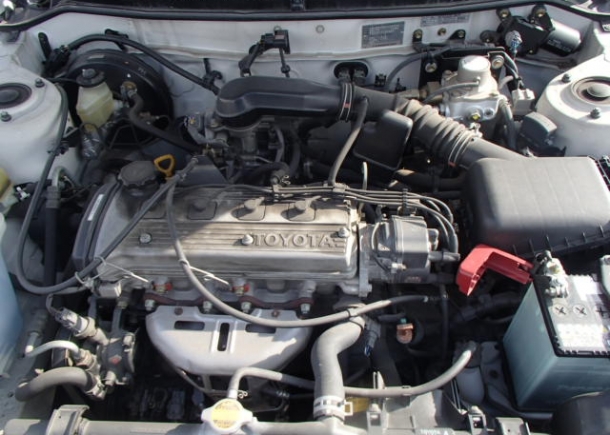 are super reliable and were used in many, many other Toyota models. It’s going to be a long time yet until we have any serious parts availability problems for these lovely old, simple units.

So if you want to import a good used Corolla Van DX, the hard working version of the good old Corolla Station Wagon of fond memory, just register here with us at Japan Car Direct and we’ll set you up with a good unit at good price.